The time has come to get positive on Boeing. The 737 Max issues will wind down over the next 3 months with BA returning to normal in 6-9 months. It has been a long slog with many miss-steps along the way. There will likely be plenty of blame-storming in the C-suite.

Reputation recovery will require the incumbents to right the ship, set it back on the original flight plan. Then, some significant heads must roll, likely covered by eye-watering golden parachutes.

Meanwhile, we take a look at how to play the stock.

Publicly announced in 2011 the first aircraft, named The Spirit of Renton after the final assembly location for Boeing, took flight in 2016. FAA certified in 2017, the first delivery was to Malindo Air on 6 May 2017.

Quite a success, by the end of 2018 there were 28 customers flying 130 of the 737 MAX aircraft. The aircraft delivered on its promise of a 14% efficiency improvement with dependability at 99.4% dispatch reliability.

Two fatal crashes of MAX 8 aircraft in October 2018 and March 2019 led to the grounding of all 737 MAX aircraft worldwide.

Boeing suspended deliveries and reduced production from 57 aircraft per month to 42.

The crew on Lions Air flight 610 just prior to the crash in October 2018 experienced the stalling issue that destroyed the next flight. Fortunately for them, they had an extra pilot flying the jump seat who diagnosed the problem and instructed the crew how to disable the flight control system in time to avoid disaster.

After the Lions Air flight 610 crash pilots were surprised to learn that a new anti-stall system was in the aircraft; complained vigorously to Boeing about this and took Boeing to task for the secrecy and lack of training on the new system.

In May information was revealed that American Airlines pilots raised concerns with Boeing executives before the March 2019 crash of Ethiopian Airlines flight 302.

Boeing has been correcting the software that was the apparent cause of these crashes. Airlines cancelled 737 MAX flights through August 2019. In June, CEO Dennis Muilenburg said the aircraft would be re-certified by year end.

Later in June the FAA identified additional issues with the flight control systems which will cause more delays in certification.

Beyond the tragedy of 338 deaths, Boeing also carries the reputation cost of slip-streaming critical control systems without notice or training; failing to acknowledge that a new control system was the root cause of the first crash; ignoring pilot concerns voiced prior to the second catastrophe; and the continuing drama of additional issues being uncovered and the questioning of the relationship between the FAA and Boeing during certification and testing.

Q119 earnings saw Boeing's earnings per share down 13% from Q118. Commentary revealed that this was primarily driven by 737 deliveries while being partially offset by higher defense and services.

Boeing reports on 24 July, giving us another data point on the impact of recent events.

The real question is whether all the issues have come to light.

One thing budding executives learn is that when a catastrophe happens, the due diligence of digging into other side issues is paramount to preclude a series of bad news announcements. Muilenburg apparently slept through that lecture as well as the one about not blaming the customers for product faults.

Reputation recovery will require the incumbents to right the ship and set it back on the original flight plan. Then, some significant heads must roll, likely covered by eye-watering golden parachutes.

Taking a long view, we think the time is ripe for a relatively low cost entry as Boeing pulls up to avoid auguring in.

One of the possibilities is to buy calls in Jan 2021. In the near term, selling out of the money calls and puts against that position may bring in some revenue during the wait for progress. 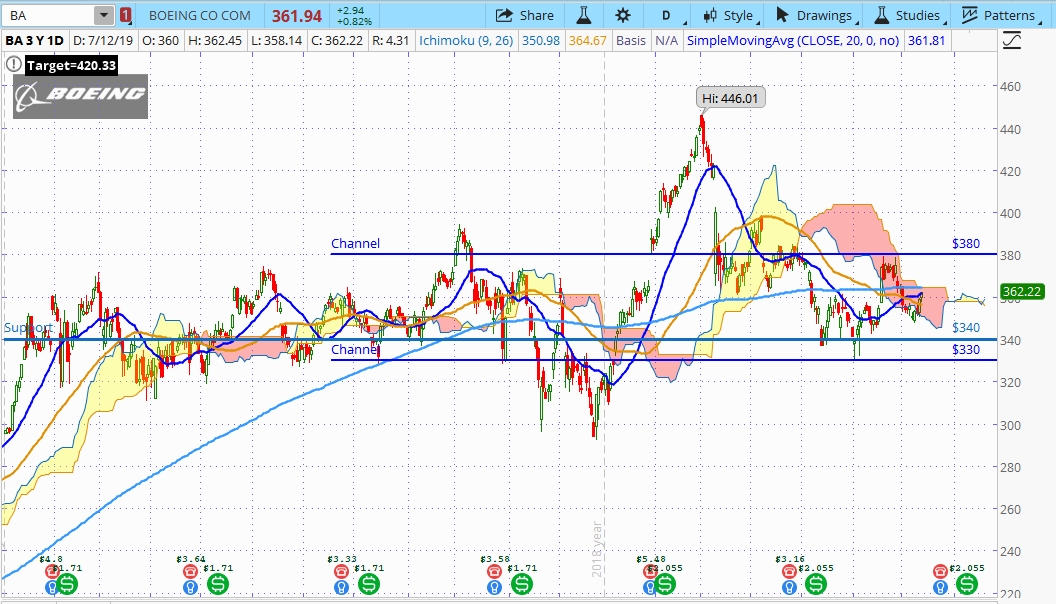 We prefer to look at long dated options with 70-75 Delta. This has been a fair compromise of cost and performance for us. In this case we have chosen the Jan 2021 $315 strike.

We will look at selling 30-35 Delta calls dated 1 week to 1 month out against this depending on the price performance.